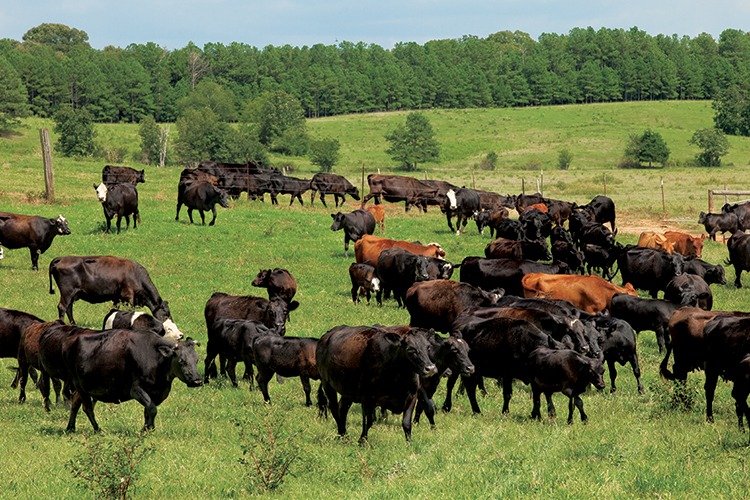 States with the Most Cattle

Texas has about 13 million head of cattle, about 13.77% of the total cattle in the United States. Texas has the second-largest economy in the nation behind California, with agriculture being one of its most important sectors. Unsurprisingly, cattle are the state’s top commodity, accounting for over half of the state’s total market value of all commodities. Since 1967, Texas has had 11 million head of cattle or more every year with the highest being 16.6 million head.

Nebraska has the second-highest number of cattle in the U.S. of 6.8 million head. This comprises about 7.20% of the total headcount in the United States. Nebraska’s beef industry has a $12.1 billion contribution to its economy and the state has about 4,570 cattle feeding operations statewide. Nebraska consistently has more cattle in the state than it does people.

Kansas is home to 6.83% of the United State cattle or 6.45 million heads. The beef cattle sector is the single largest sector in the Kansas agriculture industry. According to the Kansas Department of Agriculture, beef cattle farming and ranching has a direct output of approximately $6.3 billion and employs over 34,000 Kansas residents. Beef and beef product exports from Kansas account for about 18-26% of total U.S. beef exports.

California has the fourth-highest number of cattle in the United States of 5.2 million. This is about 5.51% of the total U.S. cattle. California is the nation’s top agricultural state overall. In 2017, cattle and calves generated about $3.2 billion in revenue and the state was home to 13,694 cattle ranches.

Oklahoma also has about 5.2 million cattle, tied with California as having the fourth-highest number. Even with such a large number of cattle, about 97% of operations are family-owned and operated. The beef industry is the state’s largest agriculture segment and is valued at approximately $4.8 billion.

Missouri has the sixth-highest number of cattle in the United States with 4.35 million head. This is about 4.61% of the total U.S. cattle. Missouri is also one of the top states for herd expansion. Missouri’s beef industry directly provides over 45,000 jobs and supports over 72,000 jobs (directly, indirectly, or induced).

Iowa has the seventh-highest number of cattle with 3.9 million, about 4.13% of the total U.S. cattle. In 2017, Iowa’s cattle industry contributed over $6.8 billion in business activity to the state’s economy. Jobs directly and indirectly related to the cattle industry and jobs induced by the cattle industry total 33,147. In 2018, Iowa’s beef and beef variety exports totaled 2.983 billion pounds.

South Dakota ties with Iowa as having the seventh-highest number of cattle with 3.9 million head. There are about 17,000 ranch and cattlemen that produce these 3.9 million head of cattle, with the majority of them are in family businesses. The direct impact of the beef industries in South Dakota is $2.284 billion and over 12,500 full-time jobs.

Wisconsin has a total of 3.45 million head of cattle, comprising about 3.65% of the United State’s total. Wisconsin’s beef industry provides 35,100 jobs and contributes $2.1 billion in total income to the state’s economy. Additionally, the beef industry allows more than $200 million to be provided annually to state and local governments through income, sales, and property taxes.

Finishing the top ten beef producers is Colorado, which has 2.8 million head of cattle or 2.97% of the U.S. total. There are about 11,267 beef cattle farms in Colorado, 91% of which are family or individually owned. Colorado is the fourth-largest exporter of fresh and frozen beef in the United States. Colorado’s leading producer of beef is Weld County.

Here are the 10 states with the highest number of cows:

EMIR HALAL PRODUCTS
Blog Categories
Recent Posts
Sign in Create an Account
Lost your password?
Select the fields to be shown. Others will be hidden. Drag and drop to rearrange the order.
Compare
Wishlist 0
Open wishlist page Continue shopping